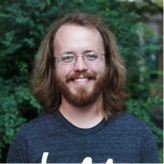 The agrarian tradition runs as an undercurrent through the entire history of literature, carrying the age-old wisdom that the necessary access of independent farmers to their own land both requires the responsibility of good stewardship and provides the foundation for a thriving civilization.

John Linstrom is a writer, doctoral student, teacher, Michigander, and occasional Liberty Hyde Bailey impersonator. He writes and publishes poetry and nonfiction prose, and has recently begun work on a PhD in English at New York University. But in this urban space, he remains haunted by the same Liberty Hyde Bailey whom he occasionally impersonated in Michigan, and by the small hometown of South Haven which they both shared some 150 years apart.
In 2013, John graduated from Iowa State University with an MFA in Creative Writing & Environment where he also rubbed shoulders with students and professors in the graduate program in Sustainable Agriculture. He had fallen in love with agrarian philosopher and South Haven homeboy Liberty Hyde Bailey in 2010, and worked for several years at the Liberty Hyde Bailey Museum, first as intern, then curator, and then for two years as executive director, after which the Museum named him their first Bailey Foundation Fellow. The museum is housed in the National Historic Site that marks Bailey’s birthplace and childhood home in South Haven.
John taught courses in creative writing and composition while a student at Iowa State, and in 2014 he taught a graduate course in research writing and methodology at his alma mater, Valparaiso. John’s current book project, Havening, takes the life and work of L. H. Bailey and slams it smack into twenty-first century topsoil. By putting Bailey’s high ideals and agrarian reform project into the context of Linstrom’s postmodern life, these fellow South Havenites, separated by some hundred fifty years’ nearness, struggle to remap new ways to live as an individual in a corporatized and fad-stricken world.