John Levis is the recipient of two National Science Foundation grant awards, one funded by the NSF Robust Intelligence directorate ($316,000) and one by the NSF Cyberlearning directorate ($565,796). The Cyberlearning grant, with Evgeny Chukharev-Hudilainen as a co-PI, is developing and testing a new pronunciation tool called Golden Speaker Builder (GSB). This tool is being developed based on research findings that suggest that learners’ pronunciation may benefit from imitating a voice maximally similar to their own, but with a native-like accent. Since 2016, the Golden Speaker team has used accent conversion technology to develop several iterations of the GSB, which has been tested with Spanish and Korean learners of English. The team is currently wrapping up a study investigating the extent to which Mandarin learners of English are able to compare their voice to a model voice and identify pronunciation errors. In the Robust Intelligence grant, the team has developed a non-native English spoken corpus called L2-ARCTIC to use for accent conversion testing, automated mispronunciation detection, and to help examine to what extent pedagogical recommendations match the errors identified in the corpus. The corpus includes 24 speakers, 2 male and 2 female, from 6 different language backgrounds. These projects are being carried out by ISU-PRL (Pronunciation Research and Learning), in coordination with Ricardo Gutierrez-Osuna (Computer Science) at Texas A&M University.

Gary Ockey and Evgeny Chukharev-Hudilainen have been awarded a grant from the Educational Testing Service ($100,000) to conduct research on building and evaluating a spoken dialogue system that could be used to help measure second language speaking ability. Computer-delivered systems in current use do not assess a student’s ability to interact, while the proposed system does. Once the system is developed, its potential for eliciting interactional competence features, such as a test taker’s ability to negotiate meaning, agree and disagree politely, and take turns effectively will be compared to a human moderator’s potential for eliciting these same features, as is commonly done. The proposed system has potential for making the assessment of second language speaking more valid and practical.

Bethany Gray is working with PhD students Joe Geluso and Phuong Nguyen on the longitudinal development of grammatical complexity in speech and writing using a corpus of TOEFL iBT responses. The project, which is funded through Educational Testing Service TOEFL Committee of Examiners 2016 Research Program, documents changes in the frequency of use and accuracy of phrasal complexity features (which are more common in written language) and clausal complexity features (which are more common in spoken language). The study contributes to the validity argument for the TOEFL iBT, demonstrating how language learners develop over time and how that development relates to language assessments. The project utilizes multi-dimensional analysis (a statistical approach to describing discourse patterns) and discourse analysis. 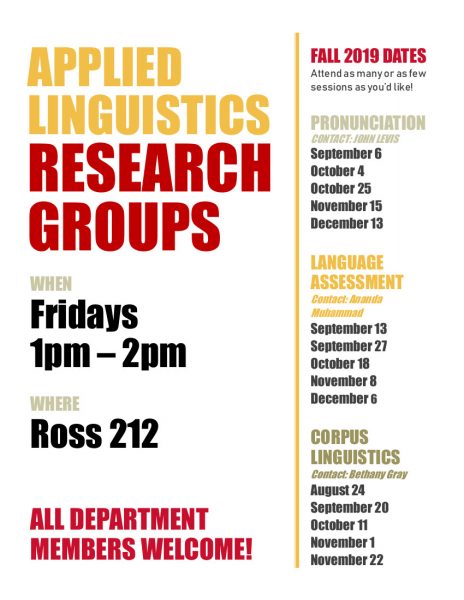 The Applied Linguistics area will continue their three research group series this Fall term, rotating on Friday afternoons between the following topics:

The flyer provides additional information, as wells as the schedule for each of the groups. These research groups are intended as collaborative spaces for discussions of issues related to these fields, skill development, and the collegial exchange of ideas.

All department members are invited to attend, and you can attend one or all. Contact information is provided on the flyer for each group, if you’d like to learn more about each group’s plan for the semester.

The Applied Linguistics Program at Iowa State University received a $1.2 million grant from the Bureau of Educational and Cultural Affairs in the U.S. Department of State for training English language professionals and developing materials for English language learners. The 23-month grant was carried out by faculty, staff and graduate students in applied linguistics and included a needs analysis, materials development for English language learners who benefit from Department of State outreach, and online and face-to-face training for 26 professionals from countries including Afghanistan, Brazil, China, Egypt, Iraq, and Togo.

This is to date the largest grant received by the English Department at Iowa State University. The project was led by Volker Hegelheimer, Carol Chapelle, and John Levis.