Dividing her time between her roles as a student/teacher and athlete/coach requires determination and persistence.

Imelda Wistey is a second year M.A. student in English Literature and an English 150/250 instructor. Last fall semester, Imelda co-taught an Honors Seminar on The Hobbit with current grad student and instructor, George McCollum. Imelda received her BA in English and a minor in Classical Studies from Iowa State University, ultimately deciding to pursue her Master’s degree at Iowa State as well. Her research interests involve the power of narrative: how stories, such as mythology, fairytales, and legends, from different cultures and time periods, written or spoken, have a basis in human experiences and how stories are interrelated. She also enjoys Gothic literature and hero narratives and hopes to apply these elements in her thesis. 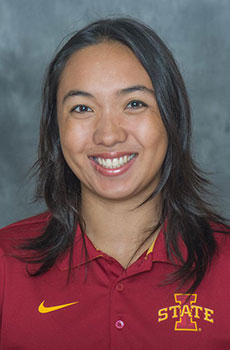 While pursuing her Master’s degree, Imelda also volunteer coaches for the Iowa State Women’s swim team and continues to swim competitively, training under head coach, Duane Sorenson as a post-grad athlete. As an undergrad, she competed for Iowa State from 2011-2014, accumulating 68 wins during her college career, receiving All-Conference and All-Academic honors, as well as representing Iowa State at the 2012 U.S. Olympic Trials and 2014 NCAA Championships. She remains the school record holder in the 100 breaststroke and was the previous record holder in the 200 breaststroke. Recently, Imelda became a member of the Philippine National Team. She competed internationally for the Philippines in Singapore at the Southeast Asian Games in June 2015, earning a bronze medal as a member of the 400 Medley Relay, and reset the Philippine 50 breaststroke national record. Her goal is to compete in the Olympics and other international competitions in the future.
Dividing her time between her roles as a student/teacher and athlete/coach requires determination and persistence. Therefore, Imelda believes that her desire to succeed as both an academic and an athlete helps her balance her time as she strives for her goals. She is grateful to Iowa State University for the opportunity to pursue her passions.